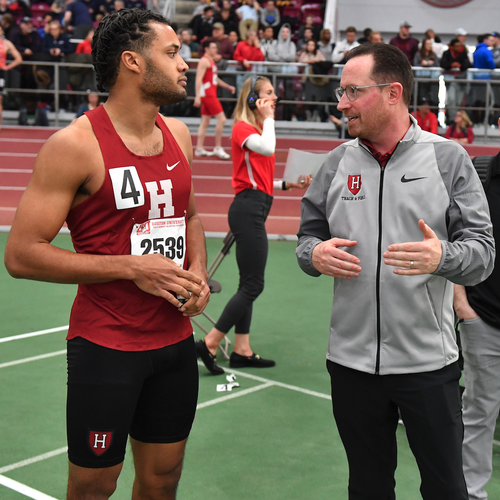 Compliments to Speed: What Else Besides Sprinting?

Marc Mangiacotti enters his 10th season with the Crimson in 2021-22. He oversees the men’s sprinters, hurdlers, and horizontal jumpers for Harvard.

The 2019-20 season was filled with success for Mangiacotti and his athletes. Jovahn Williamson broke his own record in the 400m, while also winning another Ivy League Heps title in the 400m. Mangiacotti led the team to an Ivy League Heps title in the 4x400 (3:13.85), moving the group into sixth in the Harvard record books. First-year Sam Bennett worked his way into third in the record books, as Mangiacotti helped Bennett set a career-best 7.98. Mangiacotti's group contributed 64 of the team's record-setting 116 at Indoor Heps.

Under Mangiacotti's guidance in 2017, Harvard's Jay Hebert (110m hurdles) and Efe Uwaifo (triple jump) qualified for the NCAA East Preliminary Meet, with Uwaifo earning All-America honors after qualifying for the national meet. Uwaifo was named Ivy Outdoor Heps Field Athlete of the Year, winning the long jump and triple jump at the meet, with personal records in both, and scoring 20 points for Harvard.

The 2016 season saw the continued emergence of triple jumper Efe Uwaifo, who competed at the NCAA East Regionals and British Championships. Uwaifo tallied the top jump in program history during the indoor season, becoming the first Crimson student-athlete to surpass 52 feet. Additionally, 2016 saw top-10 performances in program history from Max Mondelli in the outdoor 200 meters and Jay Hebert in the 60- and 100-meter hurdles.

The men's sprints and hurdles were a bright spot for Harvard in 2015 In the indoor season, Jarvis Harris ran a program-record time in the 60-meter hurdles, while freshman Malcolm Johnson adapted quickly to collegiate competition under Mangiacotti, registering the second-fastest Harvard times ever in the 60m and 200m dashes. Harris went on to qualify for the NCAA East Prelim in the 100m and 400m hurdles.

Mangiacotti helped with the success of the 2013-14 squad, as the men scored the most points at the Ivy League Heptagonal Championships since 1983.

In his first season with the Crimson, Mangiacotti saw the men’s sprinters/hurdles record five indoor marks and three outdoor marks that rank within the school’s all-time top 10. He also mentored Jarvis Harris ’15, who broke the Harvard records in the 60-meter hurdles and the 110-meter hurdles in the same season. Mangiacotti also helped two student-athletes garner All-Ivy League honors in 2012-13.

Mangiacotti came to Harvard after a two-year tenure at Brown. During his time in Providence, R.I., he made a big impact on the Bears sprinters, coaching five Ivy League champions that combined for nine league titles. He also coached 15 athletes that earned All-Ivy League credentials and saw his group break four school records.

His time at Brown came on the heels of a highly successful stint at Wheaton College. In six years working with the Lyons, Mangiacotti’s athletes won eight NCAA national championships and earned 53 All-America accolades. His athletes also set 31 school record performances in sprints, hurdles, and relay events, and he was named the U.S. Track & Field and Cross Country Coaches Association (USTFCCA) Division III national and regional women’s assistant coach of the year back in 2008.

Prior to coaching at Wheaton, Mangiacotti worked at the University of Houston for three years as the assistant cross country and track and field coach under the tutelage of former 100-meter dash world record holder and Cougar head coach Leroy Burrell. He was directly responsible for setting the daily workout schedule, and he also assisted with recruiting, managing meets, helping the team budget, and arranging travel plans. He also earned a master’s degree in Sports Administration at Houston.

Mangiacotti got his start in coaching at Bridgewater State College. He is a USA Track & Field Level I and II certified coach in sprints, hurdles, relays, jumps, and combined events. As a member of the Bears’ coaching staff, he worked with the sprinters, hurdlers, middle distance, and jumps groups.

Mangiacotti graduated from Bridgewater State in 1998 with a dual bachelor’s degree in elementary and physical education. He was also a standout student-athlete on the cross country and indoor and outdoor track & field teams, earning All-New England honors in track & field his senior year.